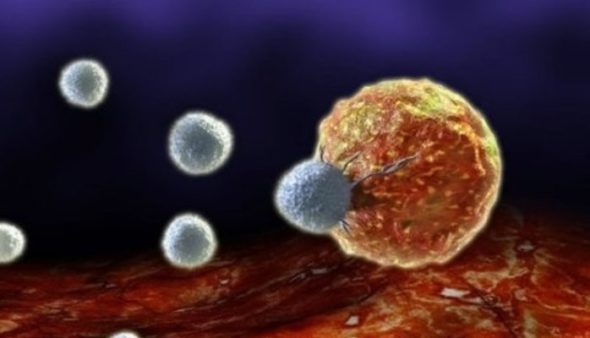 Once again, Science dazzles us in less than a month after Copenhagen university super findings of potential usage of malaria vaccination as an anti-cancer agent to an extremely interesting scientific story lead by Richard Lerner et al at Scripps Research Institute in United States. ” leukemic cells are now  immune cells, and they fight selectively each other.!”. This attractive cancer therapy approach has revolutionized our understanding of how cancer cell responds to different stimuli and change the state of cancer cell differentiation or trans-differentiation in a very strange fascinating phenomenon called ” receptor pleiotropism”.

Unlike cell fate-controlled by ordinary natural receptor agonists, researchers found that specific agonist antibody could completely change the nature of cancer cell differentiation upon binding the same receptor and convert it into a totally different functional cell. A study published by proceedings of the national academy of sciences journal showed that agonist antibody can induce conversion of acute myeloblastic leukemic cells into natural killer cells, NK, by binding thrombopoietin receptor, TPOR. Lerner and his team indicated that the newly induced differentiated killer cells are actually functional cells and showed superior capabilities in destroying leukemic cancer cells by producing interferon-gamma, granzyme B, perforins, and more interestingly, the formation of needle-like protrudes that can, in a gangster action scenario, stab cancer cells to death.

The clinical touch of the study was only demonstrated by investigating seven leukemic patients, six of them classified as M1 and one as M5. Samples of leukemic cells were collected via bone marrow aspiration. The interesting point here was with an 83-y-old white female patient in which 93% of bone marrow was replaced by acute myeloid cells with a myeloid-to-erythroid ratio greater than 10:1. Only one of the 20-selected agonist antibodies showed high specificity towards TPOR induced a dendritic cell phenotype in AML cells. In vitro studies of this sample showed increase expression of dendritic cell marker, CD11c after the initial induction. The differentiation took around 4 days by which 80% of AML cells were converted into dendritic cells. Since around 93% of the test sample was AML cells and about 80% of them were converted, it was clear that AML cell population is the source of the converted cells. The specificity and activity of the antibody were further confirmed by ligand-receptor interaction studies. The authors used both the antibody and TPO ligand with normal BM CD34 positive cells and observed after 4 days that both of them were able to induce an increase of megakaryocytes without any changes in the untreated group.

It is worth noting that this phenomenon was only applicable on leukemic cells because the study showed also that co-culturing breast cancer cells with the induced NK cells and/or AML cells did not kill breast cancer cells indicating that the conception of cell-killing effect goes beyond our regular understanding to simple oncogenic transformation and may include cell-to-cell or like-like recognition component.

We are still waiting to extend these findings to preclinical settings as it is very premature to judge based on in vitro studies alone even for these promising results. However, the approach itself definitely pulled the attention for the ability to reverse program cancer cells as part of a selective self-destruction mechanism as a new model of cancer therapy.