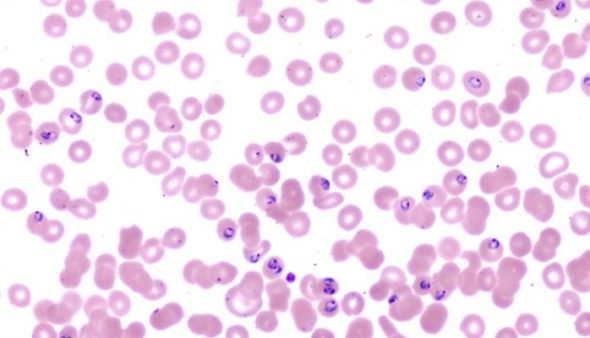 What a magnificent achievement.! A couple days ago Cell press journal has released potential findings targeting human cancer and this time nailed by Copenhagen University.  Not far from the Brazilian wasp Polybia Paulista discovery of possible MP1 anti-cancer activity, Malaria researcher professor Ali Salanti and his team, at Copenhagen University, have revealed a new mechanism by which malaria parasite, plasmodium falciparum,  adhere to tumor cells.

Scientists indicated that the ability of the malaria parasite to adhere selectively to tumor cells and transfer an added toxin via VAR2CSA conjugated protein opened a new approach to beat Cancer. While Ali Salanti and his team trying to develop a vaccine against malaria in pregnant women, they discovered that tumor cells actually express a glycoprotein called chondroitin sulfate (CS) at high levels similar to those found in the placenta. Exploiting the advantage from the fact that malaria parasite express VAR2 that enable infected blood cell to adhere exclusively to placental tissue expressing CSA allow them to engineer recombinant VAR2 conjugated protein with two different drugs, one derived from Diphtheria toxin (DT388) and the other called VDC886 hemiasterlin analog, a potent antimitotic peptide drug that interferes with microtubule dynamics  produced naturally by marine sponges and used as an anti-cancer drug in previous clinical trials but not well tolerated. In this context, drugs showed a high capacity to specifically bind the tumor cells and antagonize tumor growth.

Researchers demonstrated that the more the binding to the glyco-chondroitin sulfate on the tumor cells, the more rVAR2  efficiently internalized into CS-tumor expressing cells and therefore could potentially facilitate the delivery of anti-cancer compounds directly into the tumor environment.

Scientists have been fascinated for many years about the way that placental tissue evolved. Scientists believe that understanding placental tissue growth and proliferation as well as invasion in a controlled mechanism will allow them to understand more about uncontrolled cancer progression as they share many distinct features. Preclinical non-pregnant mice studies with rVAR2-DT or VDC886 showed no adverse treatment effects, suggesting that CS is expressed below rVAR2 baseline in non-malignant tissue in mammals and support the notion that P. falciparum-infected erythrocytes cannot bind anywhere in vascularized tissue compartments, except in the placenta.

These remarkable results obviously tell us that nature still hiding a lot to explore in terms of anti-cancer treasures. We still running in cancer marathon and no one knows yet where are we exactly in cancer research timeline and when the closure of this race will be flagged up.